The Massive List of Fun and Exciting Things to Do in Lima, Peru (2023 Update) 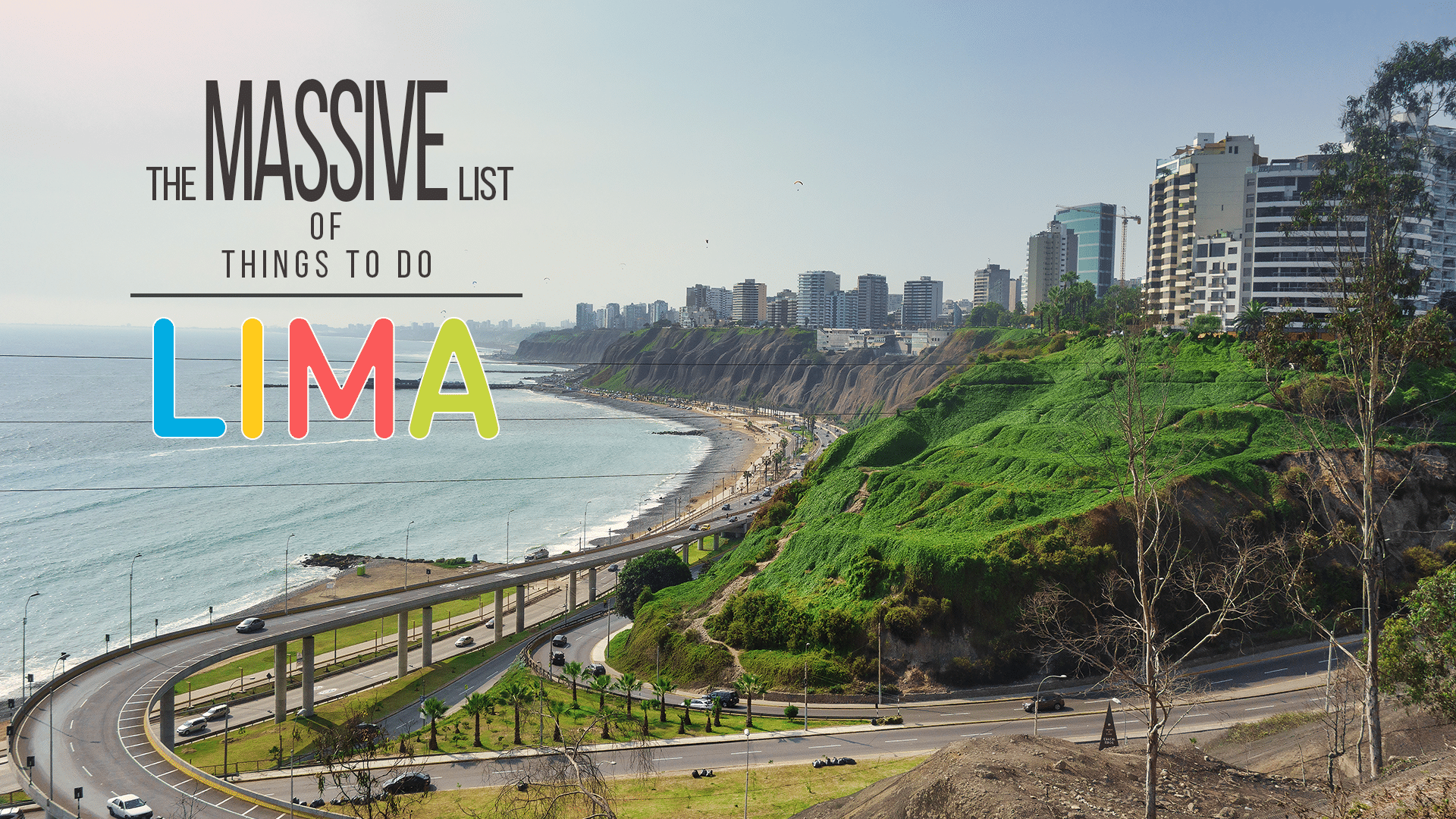 Every year, millions of people travel to the beautiful country of Peru.

Are you thinking about taking a trip to the Ciudad de los Reyes (or, in English, the City of the Kings)?

The capital city, Lima, Peru, is filled with tons of sites to see, culture to experience, and Peruvian food to enjoy.

We’ve compiled a massive list of the fun, top, and best things to do in Lima, Peru. Let’s dive in!

Stroll Around the Plaza Mayor

Even if you’re only in Lima for a brief period on your way to Machu Picchu, you’ll want to check out this beautiful plaza in the capital city.

This is the historic main square of Lima, and it is worth taking some time to explore. Filled with stunning architecture, the downtown of Lima is actually a UNESCO world heritage site.

There’s no better place to get a full, 360-degree view of the colonial architecture and history of Lima than the Plaza Mayor.

This gorgeous plaza will give you a view of the City Hall, the Cathedral of Lima, the Government Palace, and the Archbishop’s Palace. With palm trees, green spaces, statues, and fountains, this is an incredibly pleasant place to take a stroll.

If you happen to be in the plaza at noon, you’ll be able to witness the changing of the guard that occurs right in front of the Government Palace.

Not far from the Plaza Mayor, the Santo Domingo Convent is a beautiful church with jaw-droppingly stunning architecture.

One of the most important religious sites in Lima, this building was originally raised in the 16th century. Since then, however, it’s been rebuilt and remodeled largely due to damage from earthquakes.

You’ll be able to take a tour of the grounds, the convent where Dominican friars once lived, and learn more about these important saints.

Finally, you’ll be able to climb to the top of the bell tower, offering you an incredible view of Lima and the Pacific Ocean. It’s important to remember that the tower entrance closers earlier than the rest of the convent, at 4:30. You won’t want to miss out on this grand finale!

Not only will you be impressed with the architecture and grounds of this monastery and church from the 1600s, but you’ll also be able to take a tour of its catacombs.

It is believed that roughly 25,000 bodies were laid in their final resting place in the catacombs here. Until the opening of the city cemetery in 1808, the catacomb served as a burial place. Only rediscovered in 1943, it is thought that there were once secret passageways that lead to the Tribunal of the Holy Inquisition and the Cathedral.

You can’t leave Peru without having tried this signature Peruvian drink!

You’ll find pisco sours all over the city of Lima, Peru. Using Peruvian Pisco as the base liquor, this classic drink also includes egg white, lime or lemon juice, simple syrup, and Angostura bitters. Don’t let the egg white scare you away, this is definitely a cocktail worth trying (probably more than once)!

This boardwalk in Miraflores runs above the dramatic sea cliffs bordering the Pacific Ocean. With six miles of walking trails, bike lanes, eateries, and parks, you could spend the whole day exploring.

Consider checking out this area in the evening as the sun sets over the Pacific Ocean. You’ll also be able to watch paragliders flying around, rent a bike, and admire the gorgeous gardens.

Explore History in the Larco Museum

Housed in the 18th-century vice-royal building, the Larco Museum is home to an impressive collection of pre-Colombian art.

You don’t have to be an art history buff to be impressed and enchanted by these artifacts. Providing a thorough look at 5,000 years of the Peruvian pre-Columbian era, you absolutely can’t miss this site.

Afterward, you’ll be able to head over the Museum Gallery Shop where you can purchase reproductions made out of textile, metal, and ceramic, which are made by Peruvian craftsmen.

At three different times during the night (7:15, 8:15, and 9:30) from Wednesday to Sunday, you’ll be able to witness a spectacular show set to lights and music. Once the show is over, there are a number of other fountains to wander around and enjoy.

Once you’ve had the real deal, you’ll never want to settle for less.

Made using raw fish and a lemon-based marinade and served with sweet potato and corn, ceviche is best enjoyed at lunchtime.

Believed to date back to 500 A.D., Huaca Pucllana is an adobe and clay pyramid that was built by the Lima culture that inhabited the area before the Incas. Standing at over 72 feet tall, this is the most notable archeological site in the Republic of Peru’s capital city.

Open from Wednesday to Monday between 9 a.m. and 5 p.m., you’ll definitely want to check this out.

If you’re looking to spend some time on the beach, you’ll be heading to Circuito de Playas, which is the general name for the beach circuit along the Green Coast (or Costa Verde).

A long road stretching 25 km, you’ll want to either drive or bike along this route to check out the different beaches along the coast.

Head Over to the Hip Part of Town: Barranco

Filled with historical architecture and a budding art scene, this vibrant area is definitely one of the coolest parts of Lima. When night falls, Barranco transforms itself into the party district of the city, with great bars and restaurants visited by both tourists and locals.

While you’re there, you’ll want to check out the Puente de los Suspiros. Located in the main part of the district and connecting two main streets, you’ll want to cross this bridge correctly! If you hold your breath while crossing the bridge, your wish will be granted.

Thought by some to be the oldest house in the Americas, the Aliaga house is as old as the city of Lima itself.

When the city was founded by the conquistador Francisco Pizarro in 1535, he gave the plot of land adjacent to the Government Palace to his ally and friend Jerónimo de Aliaga. The house has been in the family ever since, with eighteen successive generations living in it. Aliaga’s family now lives in a modern annex, and much of the original house is available to be seen.

Containing a large collection of Peruvian artifacts and art, you’ll be able to walk back through history and experience the different eras of the country.

If you’re interested in the biological life of Peru, head over to the Natural History Museum. As a part of the National University of San Marcos, this museum has been up and running since 1918.

Here you’ll be able to see a wide-variety of Peruvian minerals, fossils, flora, and fauna.

There are so many adventurous things to do in Lima, you’ll want to try them all!

Whether you go sandboarding, surfing, canyoning, or white water rafting, there are things to do in Peru for ever level of adventurer.

Go to a Peña

If you’re looking for an authentic experience of Peruvian culture, head over to a Peña.

These gathering places filled with food, drink, merriment, and Peruvian folk music will give you a window into the local culture and warm your heart in the meantime.

Another great place to walk around, the Parque de la Exposición is home to the Museo de Arte de Lima (MALI). This museum houses an exhibition with roughly 3000 years of Peruvian art and artifacts, showcasing pre-Columbian ceramics and textiles as well as pieces from the Colonial and Republican eras.

The park itself is filled with gorgeous gardens, a lake, and views of Renaissance-style buildings.

Head Over to the Parque de las Leyendas

This park has it all: museums, a zoo, and places to wander around.

All in one place you can see the animals of Peru with your own two eyes, check out artifacts and mummies and learn about how crude oil is made. For what it’s worth, this can be an incredibly popular destination on the weekends and during public holidays. To have a less crowded experience, check this one out during a weekday.

From Lima, there is a long list of accessible and awesome spots to check out. Even though you could spend months happily exploring the capital city, why not take a few day trips to see a little more of Peru?

This UNESCO World Heritage site is best viewed from above. That’s because these enormous geoglyphs were presumably intended to be seen by the gods themselves!

Functioning as an astronomical calendar, these massive drawings in the sand represent animals like a monkey, a condor, a spider, a hummingbird, and many more.

While you can see the Nazca Lines from a small viewing tower, it’s worth taking the flight tour to get a full view of these geoglyphs. While you fly overhead, your pilot will tell you the story behind each one!

This collection of four small islands is home to a large collection of sea lions and sea birds. Donning a historic lighthouse and lots of marine and birdlife, you might consider taking a tour of the Peruvian coast in a yacht. You’ll even be able to swim with the sea lions!

A National Reserve including marine and desert ecosystems, Paracas is also home to a museum. After checking out this diverse and fascinating place, head over to Huacachina, which is an oasis village in the middle of the desert. You won’t want to miss it!

If you’re looking for things to see in Lima, Peru, check out this great sightseeing trek only 34 km south of the city. If you visit between the months of June and November, you’ll be witness to the beautiful amancaes flower and other vegetation on the hillsides facing the sea.

While you wander, you’ll probably see some hawks, robins, vizcachas, and maybe even some foxes.

If you’re looking to get away from the city a little bit, do some hiking, and discover the natural world of Peru, this is a great day trip to take. It’s important to know that heavy fog typically falling after 2 p.m. means that jaunts during this time must be accompanied by a guide.

There Are So Many Unique Things to Do in Lima, Peru, You’ll Never Want to Leave!

Lima, Peru is a city filled with vibrant culture, gorgeous architecture, and a rich and complex history. Whether you’re an adrenaline junky, a history buff, or an appreciator of the natural world, there’s something for everyone to enjoy here.

If it’s time for you to finally take that trip to Peru, head over to our booking page to start the journey of a lifetime!